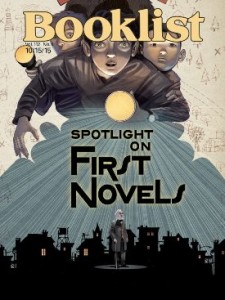 Jumping-on-the-bed excited to share the news that with just a few weeks until its publication date, Charmed Particles has received a starred review from Booklist’s Donna Seaman.

For all of you non-book-industry types, this is sort of like the fashion equivalent of getting a thumbs-up from (a much nicer version of) Anna Wintour, or if sports is your thing, then like having Bobby Knight NOT throw a chair at you. So excited!

The review appears in this month’s Spotlight on First Novels issue.

Here’s what she had to say:

Ambitious theoretical physicist Abhijat is consumed by his quest for new discoveries at the National Accelerator Research Lab outside Chicago, leaving his wife, Sarala, fresh from Bombay, largely alone as she tries to adjust to the strange quiet of small-town American life while caring for their highly intelligent daughter, Meena. Rose traveled the world with her explorer husband until returning home to this former farming community to raise their daughter, Lily, a true prodigy, while Randolph continues his expeditions. On the foundation of these parallel households, debuting novelist Kolaya adeptly builds a magnetizing, deeply perceptive tale of the clash between outsiders and insiders, personal obsession and family, tradition and change, dream and delusion. Writing with bright tenderness, piquant humor, and supple wisdom, Kolaya emulates, ever so subtly, the fleet dynamics of particle physics as she orchestrates a mesmerizing plot of revelation and adaptation. As the two brainy girls bond, the two marriages come under strain, and the town and the lab face off over plans for a Superconducting Super Collider, Kolaya investigates urgent questions of ignorance and fear, authenticity and deceit, of bridging gaps between cultures and individuals, and of recognizing and embracing what truly matters.

Hooray! A week from tomorrow we kick off the 5th annual Prairie Gate Literary Festival, this year featuring amazing poet Vandana Khanna, creative nonfiction writer John Hildebrand, science fiction and fantasy writer Emma Bull, literary translator Ebba Segerberg, and triple threat (young adult writer, nonfiction writer, and literary agent) Eric Smith. Lots of free readings open to the public. If you’re in MN or nearby, think about making the drive out to Morris, and while you’re here you can grab a best-in-the-state grilled cheese at Don’s Cafe! Everything you need to know here.

Sign up HERE for the Goodreads Giveaway for Charmed Particles. 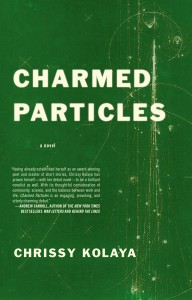